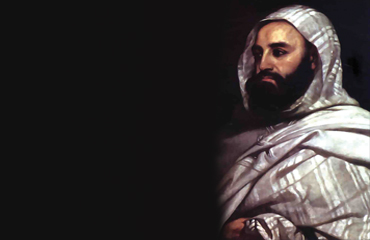 “Never worry about the origins of a man; his life, courage and values will tell you who he is. If the water from a river is fresh, it means it flows from a pure source”. This maxim is the gauge by which Abd el-Kader ben Muhieddine also known as Emir Abd el-Kader judged all men, friends and foes alike. Emir Abd el-Kader is mostly known as the unwavering combatant against colonisation and the uncompromising commander of the believers of Islam who rallied his countrymen as one in order to lay the foundation of a State. Perhaps one might have even heard of his intellectual abilities. Indeed Abd el Kader is all of the above. But, he was also a champion of peace, an open minded and tolerant man. Long before the Geneva Convention, the Emir respected his enemies even when he had prevailed over them. He was always open for dialogue and only judged men on the basis of their character.

Abd el-Kader was born on September 6th 1808 in the district of Mascara in the west of Algeria. At the time Algeria was under Turk occupation as one of the provinces of the Ottoman Empire. Abd el-Kader’s father, Muhieddine was one of the most respected religious leaders of the country and Abdel-elkader receives a very broad education to follow in his father footsteps. Very early, the young man shows aptitude for what is expected from him. He learns how to read and write at five, follows his father on the Hadj pilgrimage at 8, becomes a Koran commentator at 12. He studied sciences and mastered great thinkers such Al-Ghazali, Ibn Rushd and Ibn Khaldun but also Plato, Aristotle and Pythagoras.

The life of young man will take a different course in 1830. Algiers and Oran fall to the French signalling the end of the Ottoman era. Abd el-Kader participates alongside side his father Mahieddine to the resistance organised by all the local tribes against the new invaders and impresses by his courage and leadership qualities. By 1832, all the tribes of the west of Algeria met to choose a paramount leader. When approached, Muhieddine declined because of his advanced age but nominated his son Abd el-Kader. This choice was well received by the rest of the tribal leaders. Considering the amount of respect he had already earned, Abd el-Kader was elected Emir el-Moumenin (Commander of all believers) at the age of 24 in November 1832. The well read Emir laid the foundations of a functioning State. He appointed Khalifas (governors), collected taxes and mobilised a real army. Showing signs of the open mind that will characterise him throughout his life and applying his own principle of judging men on merit rather their kinship, he appointed a black man as his Minister of Treasury.

Abd el-Kader was very pragmatic about what would be the outcome of a frontal clash with the French troops at that stage. He buys time pending properly organising his army by signing a truce in 1834. The French troops were more than happy to leave the hinterland to Abd el-Kader and stay at the coast in the main towns. The truce did not last long as the hostilities were reopened in 1835 but another one was signed two years later. By 1839 France had realised that those truces were to the advantage of the Emir. From there on, the conflict just escalated until 1847 when the Emir was exiled.

The fighting taking place in his country did not cloud Abd el-Kader’s judgement or compromise his high regard for tolerance and judgement of men based on their character. He sought to learn from his enemies where he could. For instance, he grew a vineyard near Mascara.

Throughout the 15 years which his uprising lasted, Abd el-Kader managed to establish a genuine courteous rapport with some of his enemies. He had such a relationship with the Bishop of Algiers. The French priest ended up visiting him twice whilst he was placed under house arrest in France. He even wrote open letters to the French authorities demanding the release of the Emir as a matter of honour for France. This example of a mutual respect is not exclusive to the relationship of the Emir and the Bishop. In the midst of a brutal conflict, Abd el-Kader managed to earn with his humanity the respect and admiration of the generals leading the army that was sent to invade his country. One of the deeds for which he remains famous is the release of prisoners because he could no longer feed them. But Emir Abd el-Kader’s crowning achievement would not come as the gesture of a reigning monarch but as the act of a refugee exiled from his land towards those that took everything away from him.

By 1855, Abd el-Kader has been released from house arrest. He settles in Damascus Syria where he occupies himself with religious studies. He very soon becomes a well known and appreciated maalim (teacher). In 1860, violence between Sunni Muslims and Christians that had started in Lebanon spilled over to Damascus. Very quickly, 3000 Christians are massacred as the result of violence encouraged by external powers. Abd el-Kader, his family and the last of his followers that had gone with him all the way to Syria put their lives on the line in order to protect the Christian minority and offer them a safe haven.

Although more than ten thousands were killed, Abd el-Kader and his men managed to directly save more than twelve thousands Christians From the Pope, to the Tsar of Russia, to the President of United States Abraham Lincoln, western leaders expressed their gratitude and admiration for something that seemed only the right thing to do to for the Emir. Abd el-Kader was celebrated in France which awarded him the “Grand Croix de la Legion d’Honneur”, its highest distinction. He was the guest of honour at the launch of the Suez Canal.

The Commander of Believers had finally become to the eyes of the world what he had always been all along, a Prince of tolerance and was revered as such by all those that loved tolerance.
He spent the rest of his life exploring his spirituality, publishing manuscripts like the Book of Stations. In this book, he theorises that the road to enlightenment is actually a ladder. The higher you climb, the more blessed your life is. Abd-el Kader also studied the world around him by analysing other cultures and keeping contact with scholars, politicians and spiritual leaders across the world.

Emir Abd el-Kader ben Muhieddine passed away on May 25th 1883 after an illness which lasted 25 days.

Abd el- Kader viewed by his enemies:
“Abd el Kader returned without any condition, without any exchange all our prisoners.” He just told them: “I can no longer feed you and I don’t want to kill you; so I am sending you back.” “Not bad for a barbarian.” Field-Marshal Saint-Arnaud in “Lettres du Marechal Saint Arnaud”; 1855, page 386 “We must hide, as much as we can, these things from our soldiers for if they suspected them, they would never fight with this much commitment.” Colonel Gery confiding to Algiers Bishop Father Dupuch

“A man sums up the challenges that Algeria presents us. He multiplies by a hundred the difficulties posed by the terrain, the climate, the commitment of the people, the desperation of religious belief; he rises so high above his countrymen that we shall achieve nothing until he is brought down, and, once he is down and everybody else is subdued. Nothing will be guaranteed until he is dead. That man is Abd el-Kader. They say France created him. Perhaps, all invaders create a character that ends up personifying so to say the land invaded. But you only create what could be and what could be great. Abd el-Kader only leaves very little room for us to take credit on is greatness.”
Louis Veuillot in “Les Français en Algérie : souvenirs d’un voyage” ; 1841, page 266