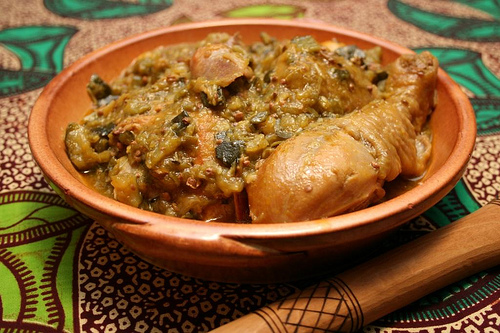 Angola has one of the richest culinary cultures in southern Africa. Angolans have 5 meals a day, three course meals and a real tradition of pastries. Marinating and roasting technique are also part of their traditions. 500 years of Portuguese colonisation explain some of these particularities. Still, the diversity is undeniable. Every region has its own specialty. Up north, in the Provinces of Zaire, Uige and Lunda food is similar to what it is across the border in D.R.C. One will get catatos(caterpillars fried with garlic, served with rice); Chikuanga, (a bread made from manioc/cassava flour, served wrapped in banana leaves); Calulu (dried fish) with vegetables, often onions, tomatoes, okra, sweet potatoes, garlic, palm oil, and gimboa leaves, (similar to spinach) and Kizaka (mashed manioc/cassava leaves) prepared in peanut butter and seasoned with fish. Cabinda’s cuisine is also very similar to the two Congos’. The dish is Jinguinga (goat tripe and blood) in Malanje and Kifula (game meat) served with boiled and toasted palm tree grasshoppers in Cuanza Norte.

In Central Angola, the food is prepared with whey, curd milk and also peas, yams, beans, starchy cassava, cereals and sweet potatoes. At the coast, in Luanda, benguela and Namibe, loads of fish and seafood is to be expected. Down south, there is Leite azedo com pirão de milh (sour milk with maize porridge) in Huila. The original inhabitants of the country, the Bushmen, live in the area. Their way of cooking has not changed for thousands of years. There is also Mafuma (frog meat) in Cunene.

Nevertheless, there are trends that have spread nationwide like the use of Palm oil. Thus, recipes like Moamba de galinga (chicken cooked with palm) and Feijão de óleo de palma (beans cooked in palm oil) are always winners. Caldeirada de cabrito (goat meat stew) and Caldeirada de peixe (Fish stew) are also appreciated. Angolan fish stew is believed to be a hangover cure if eaten before the onset of the headache.

But, funge (cassava flour paste) and pirão (made from corn flour) are the most popular dishes. They were first common dishes, often consumed at every meal in poorer households. However their popularity comes not only from their affordability but also from how easy they are to make. And, also that, from fish, to meat, to bean or even vegetables they can be eaten with anything. Angolan has a few traditional brews and sprits like Mongozo, a traditional beer made from palm nuts which is now commercially produced for export; capatica (made from bananas); caporoto (made from maize); cazi or caxipembe (made from potato and cassava skin); kimbombo (made from corn); maluva (made from palm tree juice); ngonguenha (made from toasted manioc flour); ualende (made from sugarcane, sweet potato, corn, or fruits); and ovingundu, mead made from honey. There are also popular non-alcoholic drinks like Kussangua, a drink made of cornflour.

Thus, we hope that you do not keep count of calories but rather enjoy Angola!