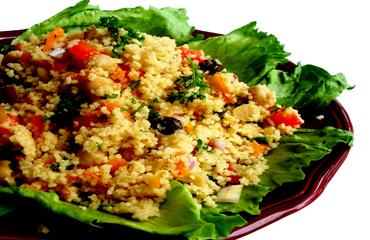 Algeria could easily qualify for the name “land of honey and sweetness”. After all, Algeria is the world’s second largest consumer of honey per capita right after China. And, aside from the mosque’s five calls for prayer, the four o’clock tea is other marker the day. Just like tea, coffee is serious business. These two traditions date from Ottoman occupation.
They are served with the rich, crunchy, nutty, honey-soaked, variety of Algerian pastries. Algerian bakers hardly rest as there are also several sorts of breads in Algeria. The Turks are not the only one to have left their mark. The Algerian Gaspacho is an adaptation of the Spanish dish Manchego. The olive oil and the vineyards show that there has been a consistent influence from the other side of the Mediterranean Sea. The same goes for the rest of the Maghreb and even sub Saharan Africa.

From El Mouradia Palace where the Algerian President resides, to the most humble household deep in the Saharan desert, there is not a single home that does not have a siniya and a couscousier. A siniya is the traditional trey on which tea or coffee is served and a couscousier is the double compartiment pot used to cook Algeria’s national dish couscous.

From couscous with beef, chicken, lamb, fish, vegetarian couscous and even couscous soaked with milk (mesfouf), there are more than 150 different types of couscous dishes. There seems to be no consensus over the origin of the name and the origin of the dish itself. Certain scholars believe the word Couscous comes from the word “K’seksu” which is the Berber name of the dish and the whole wheat semolina from which it is made. A second opinion speaks of the Arab word “Kaskasah” (to mash).As for its origins, some trace it as far as China or East Africa from where it came via Soudan and Egypt. The most plausible answer came from archeological researchers who found couscousier from the 9th Century thus confirming that couscous comes from Berber tradition. It became popular from the 11th century when the Roman Empire decided that North African Colonies should produce wheat for the whole Empire.

The original Couscous is cooked by rolling by hand whole wheat semolina that has been moisturised with salted water. It is then sifted. The process is repeated until the grains reach the right size. They are then oiled and placed in the upper compartment of the couscousier. The rest of the dish goes in the lower compartment. The grains are actually steamed by the heat emanating from the lower compartment. The culinary school of Tizi Ouzou holds the world record of the biggest couscous (5960kg). It required 1250 kg of vegetables, 100 sheep, 140 kg of peas, 250 kg of salted butter, 200kg of tomatoes, 200 liters of oil and a 8 meters high couscousier. Such disproportions are not necessary to understand that couscous in Algeria is not just a dish but a moment of pleasure to be shared.